Long-time Tucson resident R. L. Clayton’s career as an author began in earnest when he published his first book in 2012. “I wanted to write a story about human evolution going forward, the theme in the Evolution River Series. Sea Species is the unrecognized next step occurring now. The true scope of the age of genetics is beyond our understanding. Clayton’s science fiction trilogy, The Evolution River Series takes a fanciful path from humans today to the eventual end of evolution.

Clayton’s next endeavor, Wings of the WASP was a departure from science fiction. “My mother was a pilot in WWII, a member of the Women Airforce Service Pilots. I wanted to write a story about them, but not another documentary.” This historical novel is based on an incident that happened to his mother, and though fiction, it portrays many of the issues those women faced and illustrates the spirit of the WASP.

All of Clayton’s books take place in Arizona and the Tucson area. Readers will recognize places and descriptions. “I have self-published my books because I’m impatient.” His books are available at a local bookstore, Mostly Books. Both print and e-books are available online. Visit his websites www.evolutionriver.com and www.rlclaytonbooks.com for links. “I enjoy hearing from readers and entering into discussions about my stories. 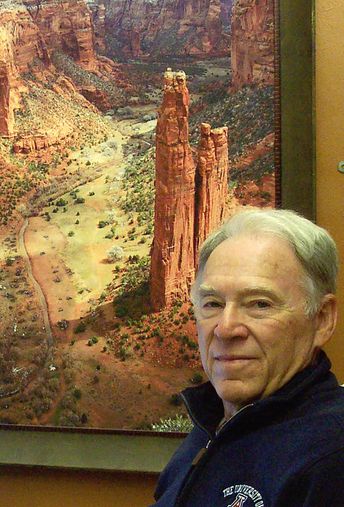 I wrote my first short story in eighth grade. That story is buried somewhere in a stack of old tablets and notebooks somewhere. During the next fifty years, little got written for fun. As an engineer, most of my writing was technical – instruction manuals, reports, grant applications, etc. Six years ago, I changed careers from engineer to writer. It’s been great fun. My talent lies in ideas, including those for stories. Dreams play a large part of my story telling. Having little formal instruction in creative writing, I feel like a beginner typist, hunting and pecking my way through writing. I’ve been learning a lot from some great instructors.